When Warren Beatty’s Dick Tracy hit theaters in the early summer of 1990, the flurry of media attention accompanying the release wasn’t focused so much on its superstar filmmaker/star – directing his first feature since winning the Oscar for the job back in 1981 – or its packed cast, which included not only Beatty but Madonna, Al Pacino, Dustin Hoffman, and Mandy Patinkin. No, most of the ink spilled over the film was about the previous summer’s Batman, and, more pointedly, if Dick Tracy would be the “=Batman of 1990.

To be fair, Disney – which released the film through their Touchstone Pictures division – was inviting the comparison. Principal photography on Tracy had finished just before Batman took the megaplex by storm, but its success took no one by surprise, and the studio figured their pricey, stylized riff on a beloved hero of old could rake in a comparable fortune. So they aped several aspects of Batman’s release, flooding the market with tie-in toys and food products, drafting co-star Madonna to do a companion album in the spirit of Prince’s Batman soundtrack, even working out an advance marketing campaign centered on a single, text-free logo (though the Dick Tracy profile took a bit more explaining to younger audiences than the iconic Batman symbol).

But origin and release date aside, Dick Tracy is a very different kind of movie than “=Batman. The latter jettisoned the colorful, campy style of the ‘60s TV show in favor of a darker, monochromatic look, a “Metropolis” / “Blade Runner”-style future dystopian production design, and a bleak, decidedly PG-13 worldview. Director Tim Burton almost seemed ashamed that his film was based on a comic book.

Beatty, on the other hand, embraced his story’s comic strip roots, homing in on a single, bold and brilliant aesthetic choice: his film would replicate the color palate of the Sunday funny papers (and a fair number of comic books), and would thus use only a handful of identical colors in paint and fabric. It’s a masterstroke, and a marvel of production and costume design (by Richard Sylbert and Milena Canonero, respectively), and a triumph for cinematographer Vittorio Storaro (who also shot Apocalypse Now, The Conformist, and The Last Emperor, as well as Beatty’s Reds). It’s an ingenious way to make the picture look like a comic strip before a character is introduced or a word of dialogue is spoken; it also gives everyone else permission to embrace the fakery, from the obvious matte paintings to the cartoon violence (it’s a soft PG) to the broad performances.

Contemporaneous reviews focused a fair amount of ire at the screenplay by Jim Cash and Jack Epps Jr. – who also penned Top Gun, so y’know, turnabout is fair play. (Bo Goldman and Max Allan Collins reportedly did uncredited rewrite work.) The script was too thin, they complained, lacking depth or nuance, a patently absurd complaint – Dick Tracy is literally replicating a comic strip, and how much psychological complexity does one find in those? Cash and Epps’ scenario is exactly as simple as it should be: we have a good guy (Beatty’s Tracy), his best girl (Glenne Headly’s Tess Trueheart), a bad guy (Pacino as enterprising gangster Big Boy Caprice), a cute kid (Charlie Korsmo), and Madonna as Breathless Mahoney, the femme fatale who can help Tracy put Big Boy away if only he’ll fall in love with her.

Which is not to say the script is streamlined: a lot happens in the course of Dick Tracy, and the film introduces so many characters, Beatty seems to have realized he needed to fill out the cast with famous faces if he wanted them to stick. Some cheerfully indulge in stereotypes (Charles Durning adopts a light Irish lilt as the chief of police); others, as the absurdly cartoonish villains of the strips, are buried under pounds of grotesque makeup (John Caglione Jr. was the special character makeups designer). Beatty appears to have called in some favors – his old Bonnie and Clyde co-stars Estelle Parsons and Michael J. Pollard appear briefly, as (hilariously) does his pal Hoffman, with whom he’d notoriously co-starred in Ishtar three summers earlier.

The film’s release in that summer of 1990 also put it at the onset of a season of high-profile gangster movies: Goodfellas, Miller’s Crossing, Men of Respect, State of Grace and Godfather III. It now seems like an appropriate kick-off, as it features Paul Sorvino and James Caan in small roles and Pacino in a major one – one that seems, in retrospect, like a preemptive parody of his aging Michael Corleone. But that’s not all you can see in Pacino’s Oscar-nominated turn as Big Boy Caprice; it showcases the once proudly naturalistic actor’s early turn towards the wild theatricality that would define much of his work of the coming decade. And he goes for broke: bellowing, pounding, hooting, howling, shooting the works, spouting misattributed quotes, and in one comic highlight, singing and dancing as he brusquely “directs” Breathless and her backup dancers’ floor show. He wears a hunch back not far removed from his beloved Richard III, but he plays the character as something closer to Falstaff – a scenery-chewing, comic force of nature.

The offscreen relationship cultivated by Madonna and Beatty during the film’s production – and the sense that this was some sort of last-ditch shot at movie stardom for her, after the embarrassing failure of Shanghai Surprise – may have overshadowed how terrific she is in the picture. It’s second only to Desperately Seeking Susan in her screen acting work – and like that film, it makes her great by simply harnessing her inherent magnetism and sex appeal. She seems to have modeled the character on Mae West, who came into popular culture around the same time as Dick Tracy, working her bedroom eyes and spouting  scorching double entendres; when Tracy threatens to take her downtown to “sweat it out under the lights,” she purrs back, “I sweat better in the dark.”

The subtle subtext of those scenes in the winking in-joke of Beatty, one of Hollywood’s most notorious ladies’ men, sternly resisting her overt advances. (Again, he did no such thing offscreen.) He’s ultimately moved not by her sexuality, but her sensitivity, and that squares with his playing of the character, who’s square-jawed – literally, in the strips – honorable, and always on the up and up. (It’s also worth noting that Beatty is telling the story of an aging man who settles down with the right girl since the longtime bachelor met Annette Bening the following year.) This is a serviceable performance, nothing fancy but it shouldn’t be since he’s the center of gravity for the wild planets surrounding him to orbit. And his direction is delightful, embracing the period of the original strips and indulging in old-fashioned touches throughout (the montages are especially wonderful, full of twirling newspapers, overlaid images, and the like).

Dick Tracy was perceived as a commercial disappointment that summer of 1990, perhaps unfairly – Disney had so transparently set their sights on it being the next Batman that anything less than those numbers was going to seem like a failure. All of which is a shame, since viewing both today, it’s clear that it’s the exponentially superior picture; it’s got more heart, more laughs, a more coherent narrative, and (dare I say it) a clearer artistic vision. Had it been received as a bigger success at the time, the filmmakers that followed might have felt they had more choices when tasked with making their comic book movies – that rather than lock-step adopting the grim “darkness” of the Burton film, that a cheerful, energetic, engaging approach was also allowed. And that could’ve saved us from some pretty grim nights at the movies. 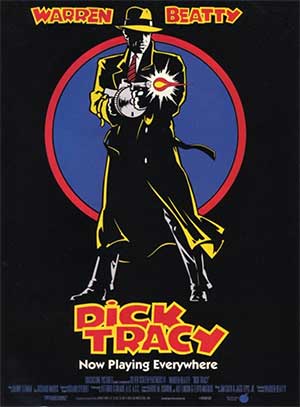