Madonna has a message: “We need to wake up.”

In words and in haunting imagery, her call-to-action is woven through the music video for her new single, “God Control,” a striking statement against gun violence.

The video begins with a warning for viewers and shows people, including Madonna, being gunned down with an assault weapon on a dance floor. The scene is evocative of the Pulse nightclub attack in 2016 in which 49 people were killed.

Madonna told CNN her response to those who may have a problem with the graphic depiction is that “this is what happens when people shoot.”

“Understand that this is what happens. Guns kill,” she said. “A bullet rips through your body, knocks you to the floor and takes your life, and you bleed to death. I mean this is reality.” 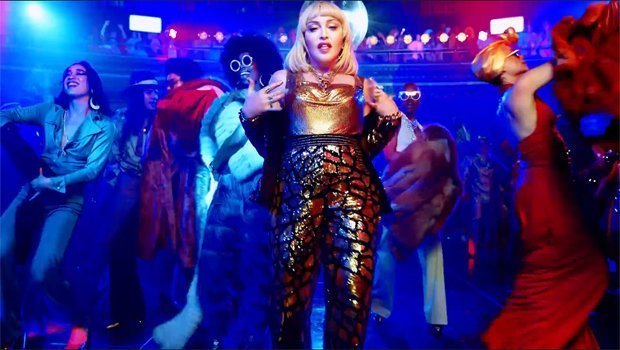 The singer draws attention to the song’s lyrics, which she types out during the video.

“Everybody knows the damn truth/Our nation lied,” the lyrics begin. “We’ve lost respect/When we wake up/What can we do?”

The mother of six said she feels a responsibility to the children of the world.

“It’s really scary to me that any public gathering, any place of worship, any school is a target,” Madonna said. “Nobody’s safe.”

The pop icon added, “We know that gun violence disproportionately affects children and the disenfranchised in our society. This certainly inspires me to use my art and platform to advocate for change.”

Shannon Watts is grateful Madonna is doing just that.

Watts founded Moms Demand Action for Gun Sense in America the day after the 2012 Sandy Hook Elementary School shooting in Newtown, Connecticut in which 20 children and six staff members were killed.

She told CNN that artists like Madonna are able to amplify their calls to end the violence.

“We know that one way to change our culture of gun violence is to change culture,” she said. “People who change culture are often influencers and creative people. They have this ability to reach and connect millions and to encourage them to get involved and to use their voices and their votes to end gun violence.”

This is not the first time Madonna has been connected to the fight.

“I Rise,” another single from her “Madame X” album, features a sample from a now-famous speech made by Parkland, Florida student Emma Gonzalez, a survivor of the 2018 mass shooting at Marjory Stoneman Douglas High School.

Madonna said that while gun safety and gun control is a huge issue in the US, she doesn’t believe it’s being addressed properly.

She said she’d like to see changes in legislation, more people getting involved and coming out to vote.

It’s a cause she believes anyone can be involved in.

The video ends with a request to support organizations fighting for gun safety legislation and statistics on the toll of gun violence.

“No one is safe,” the words on the screen flash. “Gun control. Now.”