Madonna seems to be taking style notes from Rihanna

Over the past few weeks, Madonna has been reclaiming her title as the Queen of New York City, attending events with a fervor rivaled only by Julia Fox. During Fashion Week, the singer made appearances at some of the hottest shows and after parties, but when the events moved on to another one of her other favorite cities, London, Madonna remained in New York, where she continues to rule the night life, and do so in style. On Monday, she attended the Don’t Worry Darling after party at the Bowery Hotel, wearing a look that seemed like it could have been inspired by another one of NYC’s favorite night owls—Rihanna.

Now, we’re not saying Madonna isn’t an original—she was setting trends before Rihanna was even born. Looking at Madonna’s latest ensemble, though, one could easily see the Fenty founder wearing something in a very similar vein. Madonna stepped out in a pair of oversized jeans with a dark layer underneath, so while the wide-leg pants were covered in rips, they didn’t reveal skin, just more fabric. On top, the singer wore an oversized, zip-up Balenciaga nylon jacket, which is also featured in her most recent music video for “Hung Up on Tokischa.” She then layered on the accesories as she is known to do, wearing leather fingerless gloves, layers of bracelets and diamond necklaces (one of which featured the Yankess logo), white sunglasses, black pointed toe heels that peeked out from underneath the hem of the jeans, and a black top-handle bag. Later, the pink-haired singer unzipped her shirt to reveal another layer to the look—a leather corset, with a sheer panel on top. 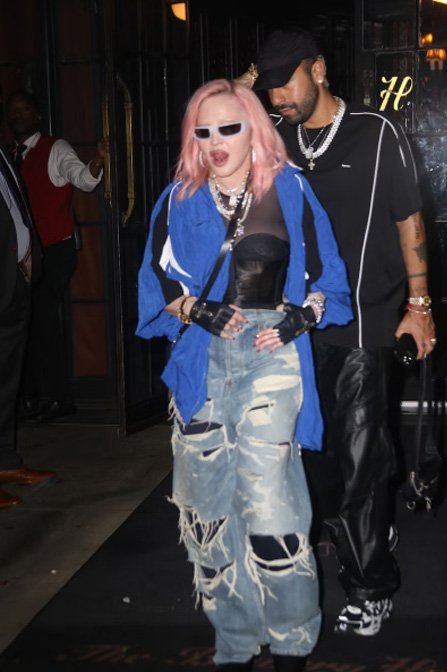 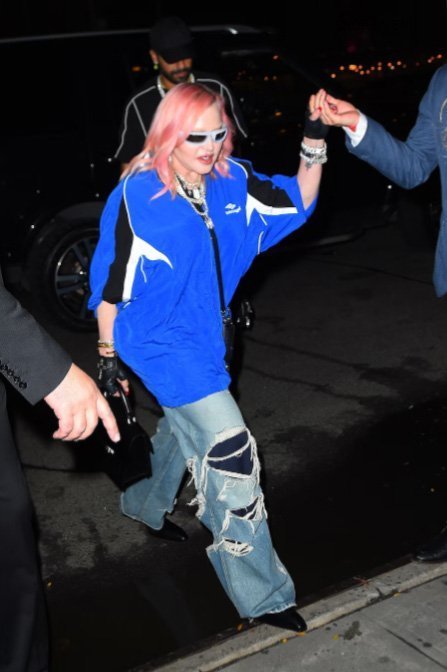 Seriously, have we not seen Rihanna in a totally similar ensemble? In fact, Madonna has been embracing this baggy, sportswear aesthetic for a bit now. She attended the LaQuan Smith after party in an oversized yellow Balenciaga sweatsuit and then wore a Yankee pinstripe-inspired tee by Willy Chavarria to his show, which she paired with a black maxi skirt also by the designer. Often times, Madonna’s style is defined by more form-fitting pieces, and corsets of course, which she is still hiding under these oversized layers, but at the moment, the singer seems to be having fun exploring a slightly more comfortable aesthetic.