Madonna shares cover artwork for new Dua Lipa remix album that she will feature on alongside Missy Elliott, Gwen Stefani and Mark Ronson

It was previously revealed that later this month she will be featured on the remix of the song Levitating.

But now Madonna has shared the album artwork for a full remix album set to be released by Dua Lipa.

While Madonna was first to share the never-before-seen cover on Tuesday, Dua, 24, followed it up by confirming it with a tweet that explained more about the intriguing new release.

Meanwhile, the 61-year-old popstar also confirmed the song would be coming out on August 14.

‘Levitating is coming,’ she wrote. ‘Dua Lipa, Miss Elliot and Myself.’

She added ‘It’s so [fire],’ with multiple emojis of fire, ‘Aug. 14.’ The song was remixed by the Blessed Madonna, who is also shown in the photo.

The aertwork shows the Like A Virgin singer in a long black coat, black cap and a black eye patch, with a silver ‘X’ – a nod to her Madame X album and tour promotions.

While Dua, front and center, wore all white in long pants, and small long sleeve crop top and white heels. 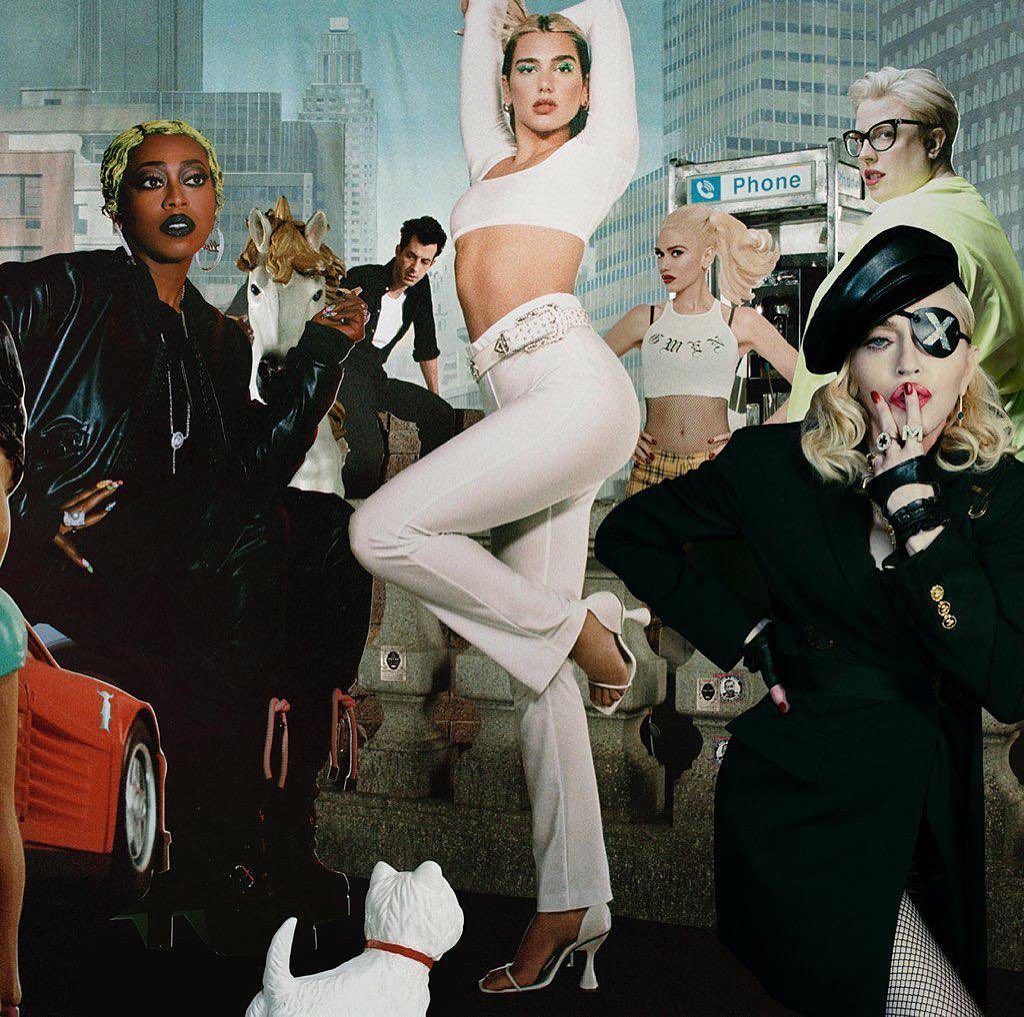 Levitating was initially released as a solo song on Dua’s Future Nostalgia album released in March.

The British singer announced the collaboration on July 27, with a similar photo, writing ‘DREAMS COME TRUE.’

Dua’s manager Ben Mawson recently spoke about wanting to collaborate with Madonna as her album Confessions On A Dancefloor inspired Future Nostalgia.

Madonna recently found herself in hot water after she twice posted a video of doctors supporting the malaria drug hydroxychloroquine as a ‘cure’ for the novel coronavirus after it was retweeted by President Trump before being removed for ‘misinformation’ by  Twitter, Facebook, and Youtube.

The pop star seemed to ignore the warnings of falsehoods in the video and was slammed by fans on Tuesday.

Madonna, 61, showed support for the doctors shown in the video, including Dr. Stella Immanuel who has a history of believing in satanic plots and that endometriosis is caused by ‘sex demons’ among other outlandish claims.

She shared the videos of doctors describing the malaria drug as a ‘cure’ for COVID-19 to her 15.4 million followers.

‘The Truth will set us all Free,’ she wrote. ‘But some people dont want to hear the truth.’

Instagram included a ‘false information warning,’ before the video could be viewed on her channel, adding it was ‘Reviewed by independent fact-checkers.’

In the video, a group of doctors who identified themselves as America’s Frontline Doctors claim the drug is a ‘cure’ for the virus and a preventative measure.

The World Health Organization has said ‘there is currently no proof’ that hydroxychloroquine is a treatment for a preventative measure against the novel coronavirus.

The WHO continued to say ‘The misuse of hydroxychloroquine can cause serious side effects and illness and even lead to death.’

In her caption, Madonna continued: ‘Especially the people in power who stand to make money from this long drawn out search for a vaccine Which has been proven and has been available for months.’

Adding: ‘They would rather let fear control them and let the rich get richer and the poor and sick get sicker.’