Madonna’s Blond Ambition dancer Slam: ‘I still get letters about my gay kiss in the film’

In 1990, Madonna changed pop music – and the lives of her dancers – forever.

It’s been 25 years since Madonna released her documentary film In Bed With Madonna, which profiled the star on and off stage during her legendary Blond Ambition Tour of 1990.

The film also shone a spotlight on her troupe of mostly gay dancers, whose presence in her life and on her stage preached a powerful message of acceptance to her huge mainstream fan base.

Now, a quarter of a century later, their stories are being revisited through a new documentary Strike A Pose, by film makers Ester Gould and Reijer Zwaan.

Attitude has taken the opportunity to catch up with five of them – so be sure to check back each day this week as we catch up with a different dancer about their experience of one of pop culture’s most iconic periods.

First up, it’s Slam, who discusses his tour memories and how people still to this day recognise him as the hunk from Vogue…

So Slam, what was it like seeing the premiere of Strike A Pose?

It was amazing! I don’t think I’ve ever seen so many grown men crying in a movie theatre! So I think it came over very well. It’s a story about the journey of 7 dancers who worked with Madonna 25 years ago, and it’s really about our lives back then, what happened to us in those 25 years, and what we’re up to now. It’s our life stories.

When you came to Madonna in 1990, where were you at professionally?

Well I had come straight out of ballet school. My mom was from Belgium, my dad was from Morocco and I grew up in Antwerp, so it was strict ballet school. Then I won a scholarship to come to New York in 1987, and I did a few jobs, but one day in February or March 1990, she put the audition notice out in the newspapers. 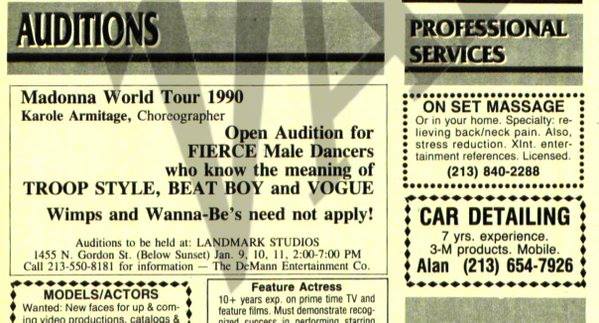 Were you a fan at that point?

I was never really a big Madonna fan. I think the first song I liked was Live To Tell. I thought that was good. Once I got the job, everything completely changed. I’d been doing ballet for six years, then next thing I’m working with an iconic artist like Madonna, and it changed my life.

She is iconic, but you also got a taste of being iconic yourself, because you were one of the most prominent figures in the Vogue video, which became one of the most famous videos of all time.

It was amazing. When we first saw the Vogue video, because we all came from a dance background, we were surprised because we weren’t dancing in it. It was all close ups. I didn’t know we would be the face of the Vogue video. And those individual shots of us, we shot them so quickly, maybe 15 minutes each, with David Fincher. It was amazing to see my face all over the world. I hadn’t realised you don’t have to dance as a dancer, to be recognised.

Well, you were posing…

Yes, I was giving face!

You weren’t in Justify My Love though?

What is your favourite memory of the Blond Ambition Tour?

On stage, my favourite memory was the section where I played Dick Tracy. Being introduced every night in front of 50,000 people, and Madonna actually mentioning my name, and people shouting ‘Slam, Slam!’ I’ll never forget that. As a dancer, you never get that much recognition. Off stage, I just loved connecting with the dancers, and her, like a family. You’re in a bubble, and it’s like life is outside of that.

Had you dancers seen each other much over the years?

Sometimes I saw Jose, but the most of us, we hadn’t seen each other for 25 years. At the end of the movie, we come together, and that was the first time we saw each other in 25 years. That was very emotional, to see everyone after all that time.

Did you play truth or dare?

I can’t tell you that! That would give away the movie a bit…

What have you thought about Madonna’s career since 1990?

I think it’s amazing that she just keeps going and going – the woman doesn’t stop! I don’t really follow the tours that she does any more, maybe here and there. But kudos to her, she still does what she loves to do. She seems to be happy on stage, despite all the criticism she gets about her age and stuff like that. I hope she is happy.

Do you think she’s a different person from the Madonna you worked with in 1990?

I think so, yeah. I don’t see the same connection between her and her dancers now, that we had back then. If I see little clips, I just don’t see the connection anymore. At the BRIT Awards, when she fell backwards, if it was us seven dancers we would have done something – we would have reacted. To me it was so strange that everybody just froze. I don’t think it’s that intimate anymore.

She would never have been pulled down the stairs on your watch then?

No, I would have helped! Maybe pulled the cape and make a big magic trick out of it. But I wouldn’t have let her lay there on her back. I just thought that was where you could see the contrast. And we were seven dancers, but now she has 30 or something. We had more fun too.  This was 1990. The stuff we did at the time, it wasn’t cool at the time, but now it is cool.

You mean in the show, or the documentary?

Like, me kissing the guys. I still get letters about that! Now everyone is kissing, but at the time people didn’t think it was cool. We were just being ourselves. But it inspired a lot of people just to be yourself, and express yourself. But we did it all without knowing what an impact it would have throughout the world.

What have you been up to in the years since then? I teach a lot, I do a lot of fashion productions, I do everything. Wherever there is a little thing and they call me to do work, I am there. But still to this day, I get fashion jobs because I worked with Madonna. They still talk about it. And some of these people weren’t even born then! So that’s pretty amazing.

Do you still get recognised?

Yeah, yeah. Especially in the dance world. Even in clubs or bars, it’s always the same questions: Is she a bitch? What does she eat? Does she work out? Of course she works out! But the documentary is great because it’s a different twist on it.

Well it’s not about her, it’s about you guys.

Yeah, it’s about us, our families, our lives, all the things we were going through, and the things we didn’t share with each other at the time too.