Madonna’s latest collaborator opens up about their next project

Creative director Ricardo Gomes talks about the video that electrified New York during Pride, and the ambitious project premiering soon on Paramount+.

Madonna has a long history with film. It’s not her acting career that distinguishes the pop star, but her uncanny ability to spot up-and-coming directors before they’ve hit it big. Before he was an Academy Award-nominated auteur, David Fincher directed Madonna in four iconic music videos, including “Express Yourself” and “Vogue.” Mark Romanek, the filmmaker whose take on “Bedtime Story” got Madonna into the Museum of Modern Art, went on to direct Never Let Me Go and the Robin Williams thriller One Hour Photo. And of course there’s her ex-husband Guy Ritchie, who has become synonymous with action-packed blockbusters, but probably the less said about that the better.

More recently, Madonna met the Portuguese photographer Ricardo Gomes while recording her last album, Madame X, in Lisbon. She invited him to join her traveling troupe, and record behind the scenes footage, mostly for Instagram, as she works on upcoming projects, including the upcoming biopic of her life. Call him the social media age answer to Alex Keshishian, who directed Madonna’s groundbreaking documentary Truth or Dare, which is celebrating its 30th anniversary.

In time for Pride month, Madonna asked Gomes, and the filmmaker Sasha Kasiuha, to collaborate on a three-piece multimedia art installation to amplify LGBTQ+ voices while reminding viewers to love themselves and stay fearless. It premiered in Times Square, and with a raucous party at the Boom Boom Room devised in partnership with the Misshapes’ Geordon Nicol and The Standard’s Corey Tuttle.

Gomes also shot a series of Polaroids that Madonna auctioned off, raising over $100,000 to benefit The Ali Forney Center, Haus of Us, and the Hetrick Martin Institute.

Here, Gomes tells T&C about working with the pop star, the inspiration behind their latest project, and what fans can expect when her tour premieres on Paramount+ in October.

How did this project come to fruition?
The Standard wanted Madonna and I to do a collaboration, sort of like an art installation. So, I started thinking about a concept and putting ideas together and I went to Madonna and initiated a conversation about doing something for Pride. She’s very open to ideas when she trusts people, so she just went along with it, and started getting excited. I called Sasha Kasiuha, who helped me write the video and edit it. We created a few posts on Instagram, followed by a teaser to let people know that something was coming. Madonna’s fans started getting curious about it. 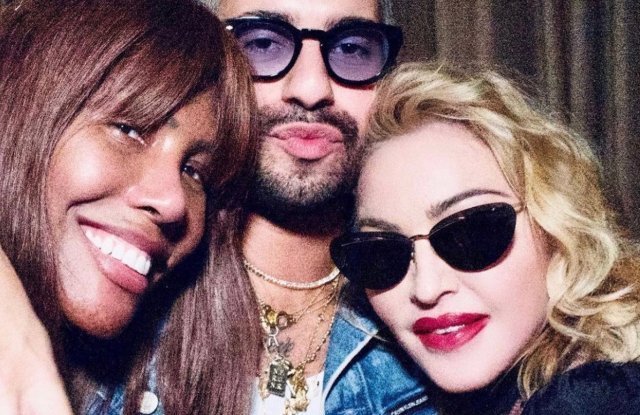 What was your design inspiration for the video?
The underground culture of the 1990s is so colorful and fun and sexy and a little bit dirty. When I think about house music clubs, it always takes me to that era. It’s kind of a fantasy that I have, and I relate to it energy-wise. I think the ’90s was also an era for Madonna that was about reinvention. It’s a cool era of music, especially for her.

This project has raised over $100,000 for LGBTQ charities. Can you tell me about the philanthropic aspect of the project?
When it comes to the Polaroids auctioned off for charity, they were all shot on the same night we filmed at her apartment. The video has this celebratory image, fun and sexy with the message, the words and with her voice and the sound. In the images, I just wanted to portray her as sexy part intimidating and engaging. People were really into them at the party, and the money raised will help so many in need in the LGBTQ+ community.

What does the future hold for you and Madonna?
I do little things here and there with her, photos and videos daily. But the biggest project is the tour film from her last tour, “Madame X,” that we’re finishing now in post-production, and should come out after the summer, likely in October. It has a very strong message that is so incredible and political, and after this year and a half of being shut down and not taking anything for granted, it’s powerful.