Selling out on the West End: How Madonna had her way with my play

I got a call from my London agent, who asked me whether I was sitting down. He said Madonna wanted to play the lead in Up for Grabs in the West End and I would need to come to London before rehearsals started, as she wanted “changes”. If I didn’t come, the producer said, sounding worried, Madonna might decide to “walk”.

It wasn’t a great time for me to be travelling, as the minor heart attack of a few years before was still causing me regular and sometimes quite debilitating bouts of atrial fibrillation. I’d been hospitalised twice and fed intravenous amiodarone to pull me out of it. Nevertheless, when the Queen of Pop says she’ll star in a West End production of one of my plays if I go to London, I go to London. I spent a lot of time in the plane reading about her and memorising the names of a list of pop hits I’d never heard. 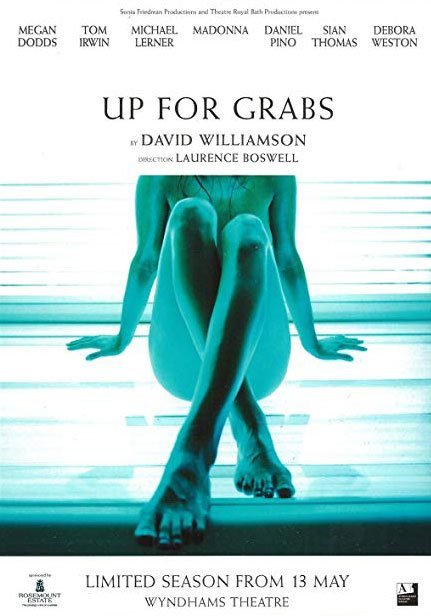 Finally, I went through layers of security and found myself in a rehearsal room with one of the most famous people in the world. The real thing, without the exotic costuming and the glamour of her stage shows, which was the only image of her I knew, was something of a shock. Madonna was a middle-aged woman with features everyone in the world knows, which in the flesh are memorable but not what you’d call beautiful. I’ve been asked if I felt in awe of her, and the truth is I didn’t. If I’d been meeting Miles Davis, there would certainly have been awe, as I’d immersed myself in his artistry and musical genius since I was 16. But you can’t really be in awe of a performer when you haven’t heard anything much she’s ever created.

Still, Madonna had a force of personality that couldn’t be denied or ignored. She hadn’t got to where she was by being a dimpled sweetie. Her whole demeanour radiated the kind of self-assurance that only millions of devoted fans can bestow. She felt she had earned and deserved her status and fame, and it had been many years since she hadn’t got exactly what she wanted. She saw no reason not to get it again. Her eyes locked onto me with a searching intensity that made me feel that if I spoke one word of self-promoting bullshit, she’d turn her back in disgust and leave. After 30 seconds of laser-like evaluation, she finally spoke.

Madonna: You’re older than I imagined.

Madonna: When I read the play, I thought you were probably mid-30s.

Madonna: Your art dealer Simone. I don’t like the name. It doesn’t feel right for me.

David: I’m not wedded to it.

Madonna: And we’re in New York, not Sydney. And it’s a $20 million Jackson Pollock; $2 million for a painting is peanuts in New York.

David: That could work. I know New York reasonably well.

Madonna: What kind of audience are gonna love someone who does that?

David: They did back home.

Madonna: Australia is that sort of country? They like amoral cheats?

Madonna: In our country, you do something bad, you pay. Retribution then redemption.

Madonna: Loren loses her money, her apartment and her husband. At the end of the play, she has to remake her life.

So I was there to create retribution and redemption. It didn’t exactly surprise me. I’d noticed over the years that under their cynical surface, Americans are seriously earnest. As befits a nation founded by religious zealots, deep down they still fear the wrath of God.

As Australia was founded by thieves and political agitators and ruled by corrupt military overseers, we quickly realised that nice guys finish last. Any punishment you were going to cop would happen here, not in any afterlife because there wasn’t one. I guess I could have pointed out that British audiences were, like Australians, not big on retribution and redemption, but I suspected that, like most Americans, Madonna saw American reality as the only one there is.

The producer, a woman in her 40s, was waiting anxiously for my reaction to my “discussion” with Madonna. I told her that there hadn’t been any discussion, I’d been given my orders. She explained that if I didn’t do what I was asked, Madonna would definitely walk. I told her I understood. Whatever Madonna wants, Madonna gets. I did the rewrites and Madonna read them. If she didn’t like them, I did them again. I was there for a week getting it “right”. The biggest change was at the end. Compare the last lines spoken by Australian Simone with those of American Loren. Simone is delighted that she got away with it all and, to add to her delight, her opportunistic behaviour has ensured long-term success.

Simone says: And the fact that I’d sold a Whiteley for $2 million meant that the big end of town started throwing paintings at me to sell!

Loren says: So. Here I am. No money. No job. No husband. But maybe it’s a blessing. At least the greed dreams are over. And he might call back. And if he doesn’t, I’ll start again.

If you’re wondering why I didn’t fight to safeguard the integrity of my play, the answer is obviously that, like Simone, I’m an opportunistic Australian and I wanted to have at least one sell-out West End show in my career.

Madonna actually has quite a small voice and had to be worked on by director Laurence Boswell for her lines to reach the back of the large theatre. But she’s a pro and she worked at it, and while she’ll never be Meryl Streep, she made her role convincing.

At the first preview when Madonna came on stage, the audience applauded wildly and, not quite expecting this, she was momentarily thrown. After a minute or two, everyone calmed down and she said her first line.

From that first preview in May 2002, the press interest was insane. Before the show, Madonna had her bodyguards stationed inside the theatre and attendants frisked everyone for cameras, but the press found ways of smuggling them in and the next morning after that first preview, the tabloids carried banner front-page headlines saying “Madonna’s Lesbian Kiss” accompanied by huge photos of it happening. With this lurid, saturation publicity, we couldn’t expect good crits as well, although surprisingly we did get a few. Opening night was bizarre. Every celebrity you could think of was there. I overheard Sting being interviewed at the end and he declared the play very witty. I’ll take that from Sting.

The opening-night party was extravagant and class-conscious. There was a raised area guarded by fearsome bouncers and you had to have a special armband to get anywhere near Madonna. The groundlings drank inferior champagne below. Rory was there and, with his critical cap on, said, quite surprised, that while she hadn’t been as good as Helen Dallimore, she had been better than he expected.

By the time the show was one week into its run, tickets were being scalped for £500 ($935). No one, of course, had the faintest idea, or indeed cared, who wrote the play. It was simply the play Madonna was starring in. But at least I’d finally had a sell-out West End hit.

This is an edited extract from Home Truths by David Williamson ($49.99), published by HarperCollins.