She looked sore and stiff at times, but at 61, the Queen of pop’s still got it: JULIA LAWRENCE reviews Madonna at the London Palladium

To be honest, I was nervous I wouldn’t be able to write a review of Madonna’s long-awaited Madame X show last night.

Not because she cancelled – again (this has happened ten times so far, due to an unspecified injury, said to be a dodgy knee and hip) – but because the Queen of Pop has built up a reputation for being ridiculously late on stage during this tour.

Not fashionably late, a whole diva TWO HOURS late, forcing fans to dance into the small hours, on a school night.

But last night at London’s Palladium, Madonna remembered her manners. And painful hip and knee be damned, she dazzled, the absolute trouper she is. 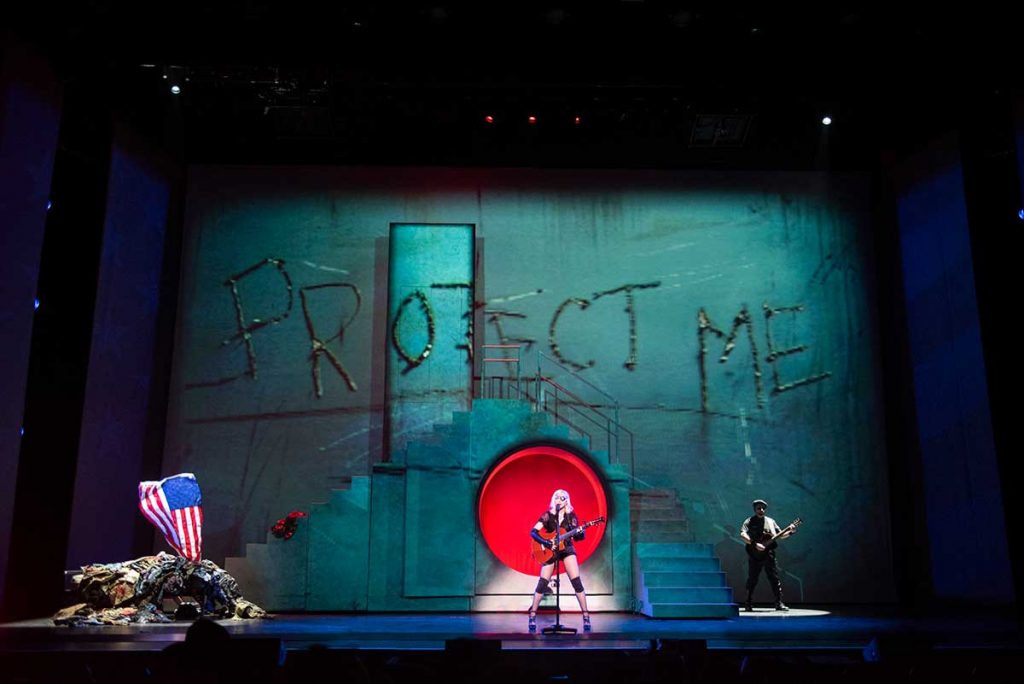 Yes, she looked sore and stiff at times, yet the next minute she was performing an impressive handstand and writhing athletically on a grand piano lid. At 61, she’s still got it. She can dance.

The Madame X tour comes with a difference. She was intent on it being an intimate, and interactive event, and had hence banned all phones.

Everyone was instructed to place their device in a lockable pouch on arrival, which only security could open, as you left or slipped out to designated phone zones.

Although we had been warned, there were wobbly scenes, reminiscent of the daemon splicing scenes from Philip Pullman’s His Dark Materials, as phones were silenced, muzzled and wrestled away. ‘But I neeeeed it…’

It did mean, however, that the usual distracting glow of a thousand photo screens being held aloft was absent which made a refreshing change, and Madonna stressed how wonderful it was ‘to look into the audience’s eyes’, as they fretted about missed calls from the babysitter.

The show opened with a motto from the late American novelist James Baldwin: ‘Art is here to prove that all safety is an illusion… Artists are here to disturb the peace,’ and finishes with police riot shields, attacking dancers under a video montage of a street riot.

All the time, Madonna looked on, clad in a sequin-encrusted Revolutionary war costume, complete with tricorn hat and eye patch. The 1984 pop princess, performing a sassy Holiday on Top Of The Pops, in rubber bangles and leg warmers, seemed a very long way away.

She took the ‘immersive, interactive’ theatre feel even further, by climbing down into the audience at one point to truly terrify some poor soul in the ‘posh seats’ and steal a swig of his beer. She also took a Polaroid selfie, which she auctioned, on stage, to raise money for her Raising Malawi charity. It went for £1,500 – around the price of a top ticket.

We all know Madonna has an opinion or two, and isn’t shy about sharing them, which means anyone who likes their concerts light on sermons, and heavy on bop-along-old favourites, is going to be disappointed by Madame X.

She takes on everything: gun control, abortion, Donald Trump, sex, religion, family, rape, violence, slavery and Brexit in her lyrics and soliloquies between songs. Some golden oldies made it, however.

There was Vogue, La Isla Bonita and Express Yourself, and Like a Prayer which had the diehard fans delighted. A lot of material came from her Madame X album, of the same name, which wasn’t necessarily a bad thing.

It’s said to be one of her best to date, combining a strange mix of disco, and Portuguese fado music, inspired by her move to Lisbon three years ago, to further her son David Banda’s football career.

In fact, the show was very much a family affair: three of her adopted daughters, seven-year-old twins Stella and Estere and 14-year-old Mercy James joined her on stage along with a crowd of women at one point, to chant (disturbingly) ‘I’m not your bitch!’, after performing Nineties hit, Human Nature.

Later, she performed Frozen while a video of her beautiful, and athletic, 23-year-old daughter dancing played in the background.

Let’s hope her medical woes have been laid to rest: she still has 14 gigs to get through in the capital. Somehow, I think she’ll do it.